The Revamped YouTube look is more vibrant and immersive

In addition to making it easy to advance or rewind to the right part of the video.

Revamped Youtube has announced the release of some changes to its interface, which aim to make the app “cleaner and livelier” and easier to use for different purposes.

Probably the big news is the possibility to zoom in on the videos, through the pinching movement – ​​similar to what can be done with photos on Instagram. Revamped Youtube began testing the feature with YouTube Premium subscribers in August and has now rolled it out to all users.

Another long-awaited element was a more precise search, to help users find the exact point in a video clip they want to fast-forward or rewind to. Now, when scrolling through a video, YouTube will open a frame-by-frame preview, making it much easier to find and watch a particular section: 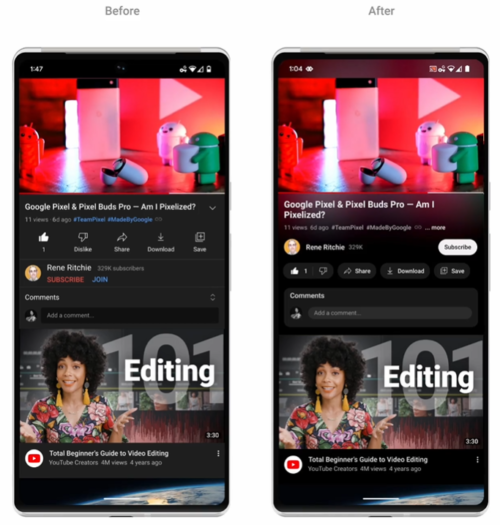 Even for those who use dark mode, YouTube also announced that it is making it even darker, whether on the phone, computer, or smart TV, “so that the colors really show up on the screen”.

A few other small changes can also be noticed, such as a redesign of the “subscribe” button and the change of links in video descriptions to buttons. Like, share and download buttons are now “formatted to minimize distractions” and video thumbnails will appear with rounded corners, aligning YouTube’s look and feel with Google’s Material You design, which has already been implemented in several of its apps, including Gmail, Docs, and Calendar.

The changes will be rolled out to all users gradually over the next few weeks.